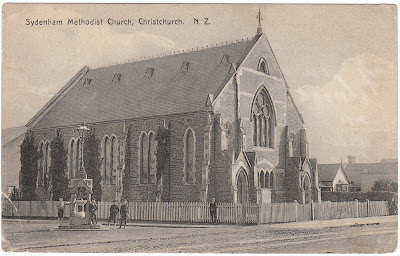 This church was designed by the Melbourne architects Crouch and Wilson, the superintending architect in Christchurch was Thomas Stoddart Lambert who modified the plans sent from Melbourne, James Goss* was the contractor. The initial cost estimate was £2400.The foundation stone was laid on 5 July 1877 by Mrs. George Gould of Springfield Road, Christchurch.

Construction was carried out over seven months and the church was opened on 3 February 1878. The church was densely packed with 600 or 700 people. A soiree was held on 7 February to mark the opening of the new church.

In 1879 the addition of a gallery allowed for an extra 120 worshippers to be seated. The galleries were supported by cast iron columns with a foliage design. The front of the galleries consisted of gothic panels in oregon pine. The architect was T. S. Lambert and Messrs. Nicol and Co., the contractors. The new galleries were formally opened on 3 August 1879 at a cost of over £500. The church could then accommodate nearly 700 persons.

When the church was built it became the head of the Christchurch (Colombo Road) Circuit with the Rev. Joseph S. Smalley appointed as the first minister. In June 1971 the church closed its doors and the property was leased to the Seventh Day Adventist Church. 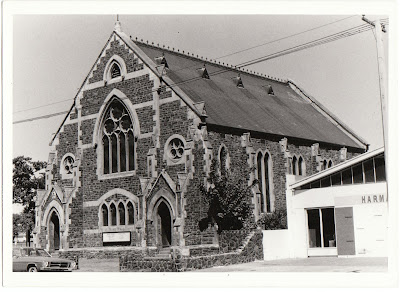 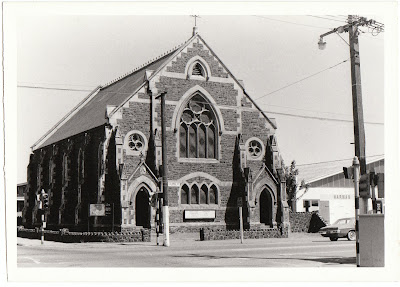 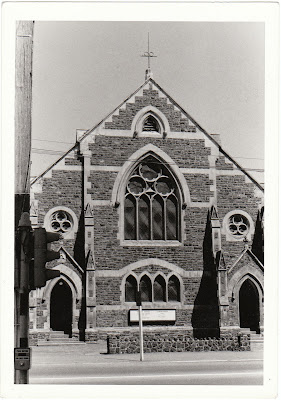 * Other work included:
1871 - Wesleyan Parsonage for St Albans at £500
1875 - large building for Messrs Edwards, Bennett and Co at the intersection of High, Lichfield and Manchester streets. £3300
1878 - additions to the Central Hotel

The following four photographs were taken in May 2003. 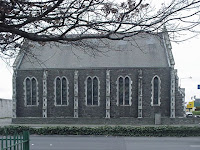 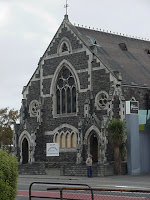 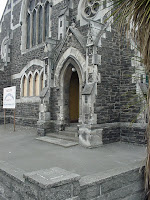 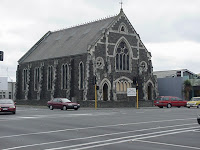 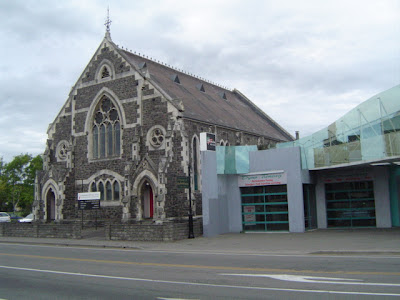 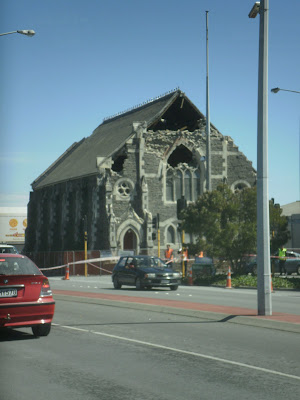 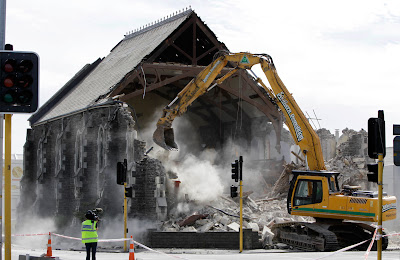 The trust in charge of one of Christchurch's oldest buildings believes it has been demolished without reason and in breach of Civil Defence rules.

The Sydenham Heritage Church was demolished last week but no one knows who decided the building had to come down.

The trust that cares for it is furious they weren't consulted before the diggers moved in – or since.

“It was like the flagship for heritage for Sydenham - it was the oldest building,” says Neil Roberts of the Heritage Trust.

Mr Roberts says the church was damaged in last Tuesday's quake but it didn't appear in danger of collapse.

The trust had spent nearly $1 million on restoring the church in the last 10 years.

“The council maintain the heritage unit that they weren't informed; not pleased the demo proceeded without their contact,” Mr Roberts says.

The demolition company says they were told to level the church by the council – but Mr Roberts isn't so sure.

“The real fear is this is one case and others may follow.”

But who signed this church's fate is of little consequence to those who loved it; they just wanted to be told their beloved church's legacy was coming to an end.

The controversial demolition of an earthquake-damaged Christchurch church has been described as "complete confusion" after a report revealed a communication breakdown.

An internal Christchurch City Council report obtained under the Official Information Act concluded there were no processes in place to guide staff demolishing dangerously damaged buildings after the February 22 quake.

The Sydenham Heritage Church in Colombo St was demolished on February 24 without the knowledge of the Civil Defence national controller or the trust that owned the building.

Initially, the council said Southern Demolition demolished the building without authorisation, but the internal report exonerated the company, blaming instead a lack of "process".

"No adverse comment can be made regarding the contractor, Southern Demolition, in this incident," the report said.

"I am keen to pursue this matter because of the cynical nature of the demolition," he said in a March 6 email, included in the report.

Sydenham Heritage Trust deputy chairman Neil Roberts said the report revealed a communication failure between authorities, resulting in the destruction of a historic building that could have been partially saved.

"It was a state of complete confusion," he said. "The police were confused and the engineers were uncertain."

Southern Demolition had been used as a scapegoat by the council, he said.

The report showed the demolition happened after a police constable became alarmed about masonry falling from the building during aftershocks.

The constable said in the report that police concerns were confirmed when a passing council-contracted engineer, Peter MacGibbon, who said he had some knowledge of the church, declared it dangerous and recommended it be pulled down.

However, MacGibbon said he had "minimal" involvement in inspecting the building and gave no instructions to police concerning demolition, the report said.

He was off-duty at the time and visited the church only in an unofficial capacity, he said.

Two Urban Search and Rescue officials said they inspected the building with MacGibbon, who they believed was acting in an official capacity, and agreed the church was dangerous, but left the decision to the council.

Emergency operations centre official Owen Southen said he was subsequently contacted by police, who claimed the building was dangerous and needed to be demolished urgently, citing the engineers' advice.

Southen said he asked Southern Demolition to visit the church. The company completed an inspection but insisted on official written permission before proceeding.

Southen then recommended the church for demolition to another emergency official, Stuart Graham, who gave final approval.

Graham said he gave approval but believed this happened only after Southern Demolition had already demolished the church.

Roberts said the demolition left the trust in a difficult financial position as it still owed the council $410,000 from when it bought the church in 2001.

He was keen to build a community centre on the site, but the council was entitled to claim any insurance payment to recover the debt, placing the trust in an uncertain position.

Posted by Early Canterbury Photography at 1:36 AM