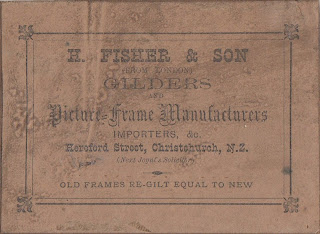 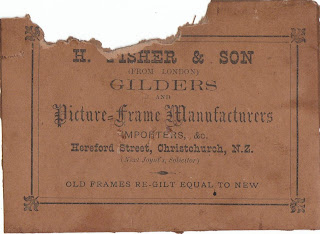 ...Local Industry - Mr Fisher, Hereford Street, has just finished a very handsome picture frame, ordered by a gentleman in Southland, for the purpose of being sent to England. It is intended to enclose a picture of New Zealand scenery for presentation to the "Cotton Lords," of Manchester as a specimen of New Zealand art. The frame is 4ft 10in by 3ft 6in, very neat in design and exceedingly well furnished. 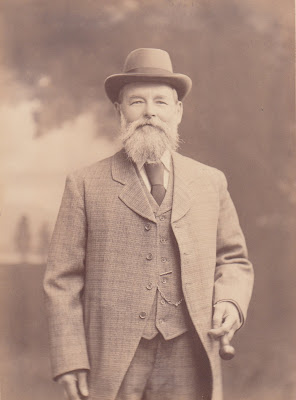 Henry Fisher founder of H. Fisher and Son
Photograph by Standish and Preece
Platinette Process
Half a Century of Business
Messrs H. Fisher and Son
Many Years of Service to Art
The story of H. Fisher and Son, art dealers and picture frame makers, is more than a record of commercial progress, although an outstanding name and reputation achieved during, more than 60 years of business is sufficient witness to the success of the firm. However, the making of picture frames and the buying and selling of pictures is a trade with a dignity derived mainly from the art which it serves. To frame pictures as they should be framed it is necessary to love pictures. The buying and the selling, of course demand discrimination and some of the qualities of the connoisseur.The firm has been working now for three, and in some cases four, generations of many of the old Canterbury families. The work of great artists has been exhibited in the little gallery in High street from time to time.The great Dutch painter who made his home in Canterbury, Van der Velden, was a customer, and there is no doubt that he, like many other Canterbury artists had more than the regard of a business acquaintance for the men who framed his works. There were some artists, too, who had reason to be grateful for assistance given them, often without thought of repayment, in early attempts to make their way.
Sixty-five Years Ago
Sixty-five years ago, in 1870, the firm of Steere and Wates, art dealers and picture framers, was bought by Mr Henry Fisher, the father of Mr J. H. Fisher, the present senior part¬ner. Henry Fisher had been foreman with a leading firm of gliders in London, J. R. Chance. While with them, he had carried out framing commissions for many of the foremost British artists of the day, and had been entrusted with gilding work at Windsor Castle.For a number of years Mr Fisher carried on the business in premises on the corner of High street and Hereford street, opposite the Bank of New Zealand. In 1884 he moved to the present site in High street. He retired from active business in 1905. In 1907 Mr J. H. Fisher was joined by his son, Mr H. H. Fisher, who later became a partner.The firm has just cause for pride in the length of service of some of its employees. The present foreman, Mr W. H. Cockroft, joined the firm years ago, and the joiner, Mr J. F. Kingdon, 35 years ago. Even the junior workman has been with the firm for 16 years, and the average length of service of the whole staff is more than 33 years. There are eight employeesin all. 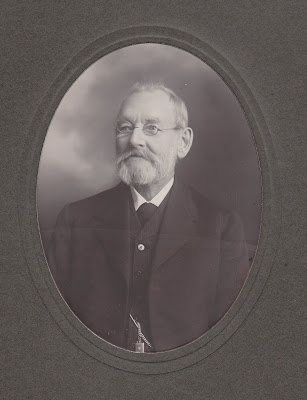 Restoration of Pictures
The restoration of pictures which have lost their freshness, or have been damaged, is work only for experts. Abroad it is a highly regarded professional service. Yet this work has been done by H. Fisher and Son since the firm began in business.The firm was en¬trusted a few years ago with the restoration of the pictures which were taken from the old Durham Street Gallery. Quite recently the complete restoration was effected of a Van der Velden which was in a very bad state of repair. This picture had been rolled up and the canvas was cracked on almost every half-inch of its surface.Picture-framing does not demand to¬day the detailed craftsmanship necessary 50 years ago. Then it was not possible to buy hundreds of varieties of mouldings ready made, needing only to be cut into lengths and built into frames. Every moulding had to be made by the framer.Gilding, too, was not a mechanical process. It was done with gold leaf—thin leaves of 22 carat gold—which had to be applied to the moulding with expert care so that no mark appeared on the smooth golden surface. Some of the frames gilded in this way have been returned to the shop after 60 years, showing no trace of wear; this is only another indication of the way in which the craftsmen of the old tradition did their work to stand the test of time. 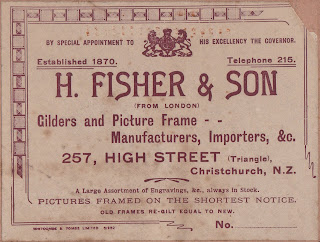 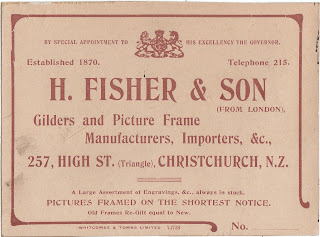 Help for an Artist
One example of the assistance so willingly given by the firm to artists in difficulties, and also of the way in which generosity may be imposed upon, is an incident which occurred many years ago in Mr Fisher's shop. A well-known artist came into the shop, dressed, in the style of the day, in frock-coat and "bell-topper." Before he left his night's lodging had been paid for, and his fare to Wellington. Mr Fisher recalls that this artist carried all his painting materials in the case of his "topper."By some operation of the "whirligig of time," the original label of the firm advertises a branch of' work which has only recently, after 30 years or more, returned to popularity. Among the many undertakings of the firm was mentioned, "ladies" needlework mounted." Probably the style of the needlework was different from that of the embroidered designs popular today, but the moral is the same. Not many Christchurch people realise the extent of the business of H. Fisher and Son, in represented only to them by the shop and gallery in High street. Actually, the firm undertakes commissions from all parts of New Zealand, and sends a good deal of work abroad. Much of this work outside the city is sent at the expense of the customers, which indicates the wide recognition of the quality of the work of the Christchurch firm.
The Press, Saturday 10 August 1935
Obituary
Mr J. H. Fisher

Mr John Henry Fisher, aged 90, died at his home in Christchurch yesterday. Mr Fisher, who was born in London came to Christchurch with his parents in 1870. His father established a business as a picture framer and art dealer when he arrived in Christchurch, and Mr Fisher entered the business as a young man, and was actively engaged in it until about a year ago.He was educated at St. John's Day School, and in his youth was a keen cricketer. Mr Fisher was well known in Christ­church, and was an authority on the early history of the city.Mr Fisher's wife died in 1914, and he is survived by three children, Miss Gladys Fisher and Messrs Harry and Alan Fisher, all of Christchurch. 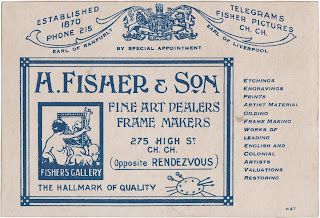 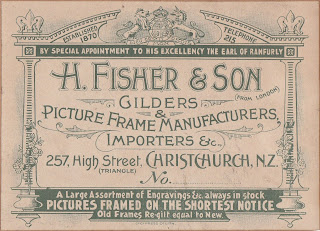 A Friend of Artists
Death of Mr John H. Fisher
One of Canterbury's earliest art patrons, Mr John H. Fisher, died this week at the age of 90. Mr Fisher, who was well known as the head of a firm of art dealers established by his father in 1870, helped many of the earliest artists in the province. Many experienced his kindliness, were encouraged and guided in their craft, and received more tangible assistance when in need. His shop in Hereford street and later in High street was a meeting place, and his death severs a connexion (sic) with artists which went back s as far as the days of John Gully, one of the first New Zealand landscape painters.Count Nerli, a notable Italian portrait painter, who painted Robert Louis Stevenson in Samoa and sold the portrait for a song in New Zealand (it hangs now in the Scottish Academy) was well known to Mr Fisher.Petrus van der Velden, the Dutch painter, who gave Christchurch its first experience of the Rembrandtian artists, was also a frequent visitor to the shop. Van der Velden acted as the mentor of many young artists and made of Christchurch the art centre of New Zealand. During this period, when art societies were flourishing and the first art gallery was opened in Christchurch, van der Velden gathered a school of young artists about him, many of whom lived a Bohemian life and Mr Fisher's shop was their usual meeting place. Maddren, Walsh, and Sprott were among his followers and a tradition of landscape painting which has been continued by several Canterbury artists was established. Van der Velden's insistence on a profound study of his subject matter was implanted in his contemporaries.John and Menzies Gibb, Lindauer, who painted the Maori and whose best work is in Auckland, near Goldie's collection and Hoyte and James Peele, were other early artists with whom Mr Fisher was connected.Mr Fisher's father set a high standard in the work displayed and sold in the shop, and this tradition was continued by his son. Because of his acute understanding of human nature Mr Fisher was an expert salesman and a highly-skilled liaison between artists and patrons. Due in some measure to his work, Christchurch now possesses a representative collection of the works of New Zealanders and has been the selling centre of New Zealand. The work of New Zealanders has been stimulated by the importation, by the firm, of many of the best works of overseas artists. 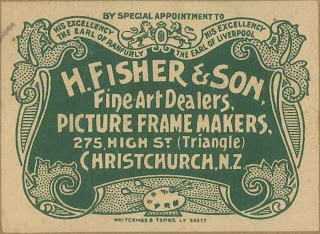 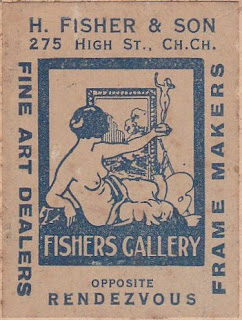